Skip to navigation Skip to content Skip to footer
! 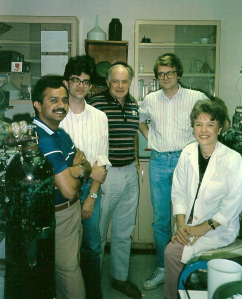 Herbert John Evans, Jr., Ph.D., was a protein chemist and enzymologist who used proteins from snake venoms to investigate biological activity in the coagulation cascade, and his protein structure/function studies led to the identification and prediction of biologically useful peptides.

Dr. Evans joined the faculty of the Department of Biochemistry in 1974 and served for 24 years until his untimely death in 1998. In his memory, his colleagues and friends established the Herbert John Evans, Jr. Award.

Each year, our faculty present an award in Dr. Evans’ honor to the most outstanding senior graduate student in the Department of Biochemistry and Molecular Biology. It is hoped that the talented and conscientious student who receives the award will aspire to and excel at the same qualities of rigorous scholarship, honesty and diligence, which Dr. Evans valued.

Recipients of the Award